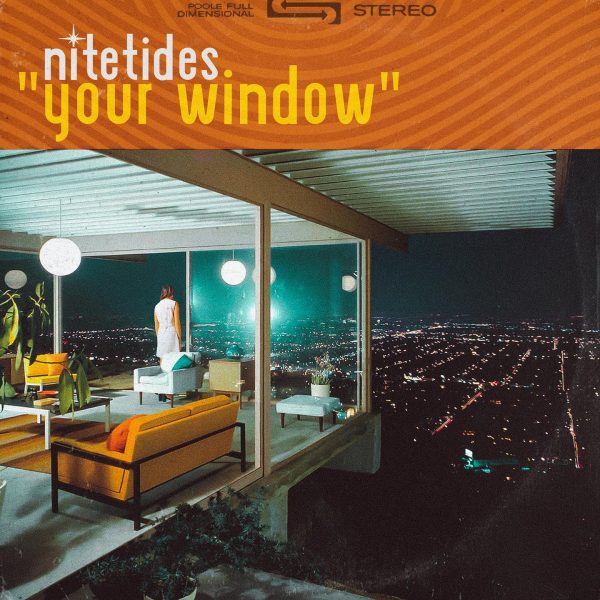 Emerging just last year and with only two singles out and about, what we can gather about Nite Tides AKA Ryan Poole is that he is a dedicated musician with a shameless intention to uplift through his tunes. His surf-rock sound boasts plenty of pep, and the project’s sunny vocal harmonies, especially those found in debut single ‘Forever Baby’, have a definite Beach Boys flavour to them. The second of Poole’s tracks to be released, ‘Your Window’ is a catchy and heart-warming addition to Poole’s growing catalogue of breezy, retro-inspired tunes that’ll undoubtedly leave you smiling.

Poole, who outside of Nite Tides works as a sound engineer and producer, hadn’t finished ‘Your Window’, when he shared a taste of the song online. He explains, “I posted the rough idea for this song on Instagram, and the guitar player for Matchbox 20 randomly found it. He gave me the idea to create the entire song on Instagram with people pandemic style”. So, as feedback and creative input flowed in from fellow musicians and fans alike, Poole took notes and publicly built the positive surf-rock tinged single piece by piece, enlisting pianist Nathan Sepulveda and guitar player Zach Ummer along the way.

The project’s focus on mood boosting music makes sense given its origin story – Poole was driven to build Nite Tides following a year mired in despair. Experiencing a devastating family trauma and a tornado, compounded with the life-changing circumstances of the pandemic, left Poole at his lowest point. But, with the plentiful time that lockdown afforded, the music lover resolved to channel his pain in a healthy way, getting to work in the studio. By the time Poole had launched Nite Tides in August 2020, life had changed for the better.

Find more from Nite Tides on:

Find Your Window on our New Indie Music and Surf Rock playlists.