Fear is a topical lyrical theme considering we’ve spent the past 15 months in forced solitude. Our faces...

With a contemplative verse and an energized chorus this song takes you on a journey similar to a dream.

Meet the man behind Elephant Castle

Elephant Castle's first single, “Cool To Be Unhappy,” hit the internet airwaves on March 27, 2020. Their retro-inspired...

My Muse by Elephant Castle whips the listener into headphone euphoria

My Muse by Elephant Castle is the 4th single to debut from Phil Danyew and he’s no stranger to...

The Rizzerlers have been quickly making a name for themselves ever since forming in early 2019 in London by putting on gigs almost weekly, drawing in steady crowds at venues in London including Nambucca, The Islington, The Old Blue Last and The Camden Assembly, sharing the stage with established British rock bands such as The Luka State, Scowl and others. Currently working on their debut album, and a photobook, the band have been building up a buzz in the London live scene and their debut single is only anticipated to add fuel to the fire so these guys are definitely ones to watch as they take the punk rock music scene by storm.? 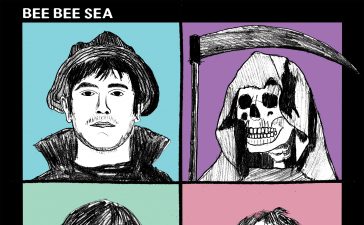 Garage-psych band Bee Bee Sea have offered up a teaser from their forthcoming album ‘Day Ripper’ due for...

Superocean – Best Thing will take you away. It will get you out of your body and outside your mind – if only for a moment.

These are strange and unprecedented times. I, like many of you, have been self-quarantining for 17 days now....

I freaking love my job. Every single day I get the opportunity to discover incredible new songs by...

Jaialai – Victor’s Belt emerges as a chilled out, modern twist on the surf-rock sounds of the 60’s

Jaialai have been making waves in Miami for a few years now, but with the arrival of fresh...

Drug Hunt have returned with a rebel rousing anthem for the post-millennial generation: The Tower

Scaling the heights of the avant-garde, while shaking the Rock foundations of the underground to its core, this...

Love ‘n’ Joy – Come About (Bender on the Silk Road)

Making their home base Kiev, Ukraine is indie/psych-rock band, Love'n'Joy. When not busy on the festival circuit, they’re...

The Selfish Cales – Throw Your Watch To The Water

Hailing from the bustling city of Turin in northern Italy, The Selfish Cales have an authentic psychedelic pop...

For many years growing up I had an electric pencil sharpener. It was one of the first models...

There’s so much to like about SWIMM’s new single, Speak Politely. This track makes such short work of...

The song begins and the drums play a thick but sparse beat. I am intrigued already, being a...

Hamburger-based band Waves Of Joy have released their new single 'Conversations' on September 15th. Leaving the Folk- and...