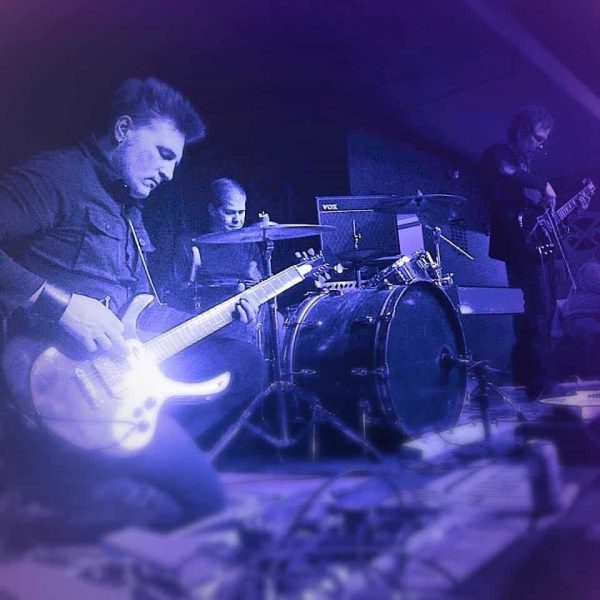 Place yourself in the shoes of the Italian poet Dante as Virgil leads you down the circles of Tartarus and then up the mountain towards Purgatory. Imagine the searing flames of hell and the sunlight cresting over the slopes are allegories for questions. Virgil offers no answers, he only wishes you recognize the canvas for inquiry. Now imagine Virgil is a rural winemaker from North Dakota fascinated by UFOs and conspiracy theories. That’s what listening to Comets ov Cupid is like.

The group, led by Jason Kesselring, plays a style of instrumental rock often referred to as space rock by those in the North Dakota circles Kesselring occupies. He prefers the term Faustian music. It denotes Kesselring’s desire to explore through a combination of krautrock song structures, droning repetitions, long trance sequences and metallic guitar tones. Kesselring chose the term, originally taken from some of his favorite Beat poets, because it reflects his mission to probe and stretch the outer limits. He also says, “I thought it sounded cool.” Comets ov Cupid is a project with lofty ambitions and an intellectual presentation but Kesselring grounds his curiosity with this philosophy; “If you’re going to space you still need gravity.” Kesselring invites listeners to be active participants in his floating astral adventures. He’s the pilot you would want to share a drink with after the tour. His latest release – last year’s Seraphim EP – veers towards dessert rock with psychedelic riffs bumbling along route 66 in a dune buggy.

Comets ov Cupid grew out of the space rock community of Fargo, North Dakota, beginning as a solo act with musicians being recruited when it came time for live shows. Over time Kesselring has assembled a small collective of collaborators he can draw from depending on Comets ov Cupid’s direction. They’re all after the same golden apple; a Faustian drive towards infinity. “I like the idea, it sounded dramatic. I liked the philosophy of there always being more beyond. It’s kind of Promethean – stealing the fire from the gods. I wanted to do it with music and guitar and sustaining notes.”

“We wanna create a feeling or mental state. We’ll use metal for that, creating it very repetitively,” Kesselring says. The touches of black metal in Comets ov Cupid are present but faint, like the tremolo picking on 2013’s Vril Kosmische Urkraft. Kesselring draws more from atmospheric musicians like Richard Pinhas, Philip Glass, Brian Eno, and the German krautrock scene of the 1970s. “I want to create a primal force, like a wave. Metal can be crushing and punishing, but we’re in a rocketship, we want it to levitate. Even rhythmically we wanna get the feeling of hovering.”

Of importance is Kesselring’s insistence that Comets ov Cupid remain an instrumental act. Though he previously dabbled with vocals he found the human voice trapping. “With instrumental music a person can bring their own thing into it.” Kesselring employs imagery from Hellenism, Greek mythology, ancient Egyptian gods, gothic architecture, witchcraft and on Seraphim, the portrait of Kali, the Hindu Goddess of time and death, to stoke this curiosity. “I take a lot of the song titles from space references, occult references, things people don’t think about in daily life. I want to snap them out of their normal rhythms and take them somewhere.”

Despite its enveloping sound Comets ov Cupid never imposes on the listener. Kesselring is equally ambitious and humble. “I think it’s an exploration of the themes or an abstraction of them. I’m not putting any personal dogma into it besides exploring consciousness.” This open floor approach invites different interpretations of Kesselring’s scenes. Some may find solace in the droning pieces whereas others may journey into space and question their place amongst the stars. Not that Kesselring would mind. “Human consciousness has always been an interest of mine, whether it be through meditation, paranormal experience, magic; those are totally normal things people deal with every day and have for as long as there’s been humans.” He jokes that if we were to begin discussing UFOs our interview would’ve lasted all night. Kesselring combines the rural curiosity of noticing a star shining brighter than the others and the Goethe principle of pondering how man could reach said star.

“Within the music I just want an experience of being before it, like seeing a storm or wondering what the hell is in the sky or things that put you in an awe-inspiring state,” Kesselring says. Speaking with him and listening to Comets ov Cupid are both surprisingly energizing experiences. Kesselring may describe his approach as an intangible push but it’s more holistic. It’s an invitation to an expedition where the end goal is to locate the end goal. Kesselring empowers those to inspect their surroundings, question where their reality ends, how far subjectivity goes, and emphasizes fluid experiences rather than static states.

Connect with Comets ov Cupid via

the authorColin Dempsey
Colin Dempsey is a Toronto-based writer who covers music, dabbles in fiction, and spends too much time calculating his macronutrient intake. More of his work can be found at colinhdempsey.ca
All posts byColin Dempsey
show 3 comments