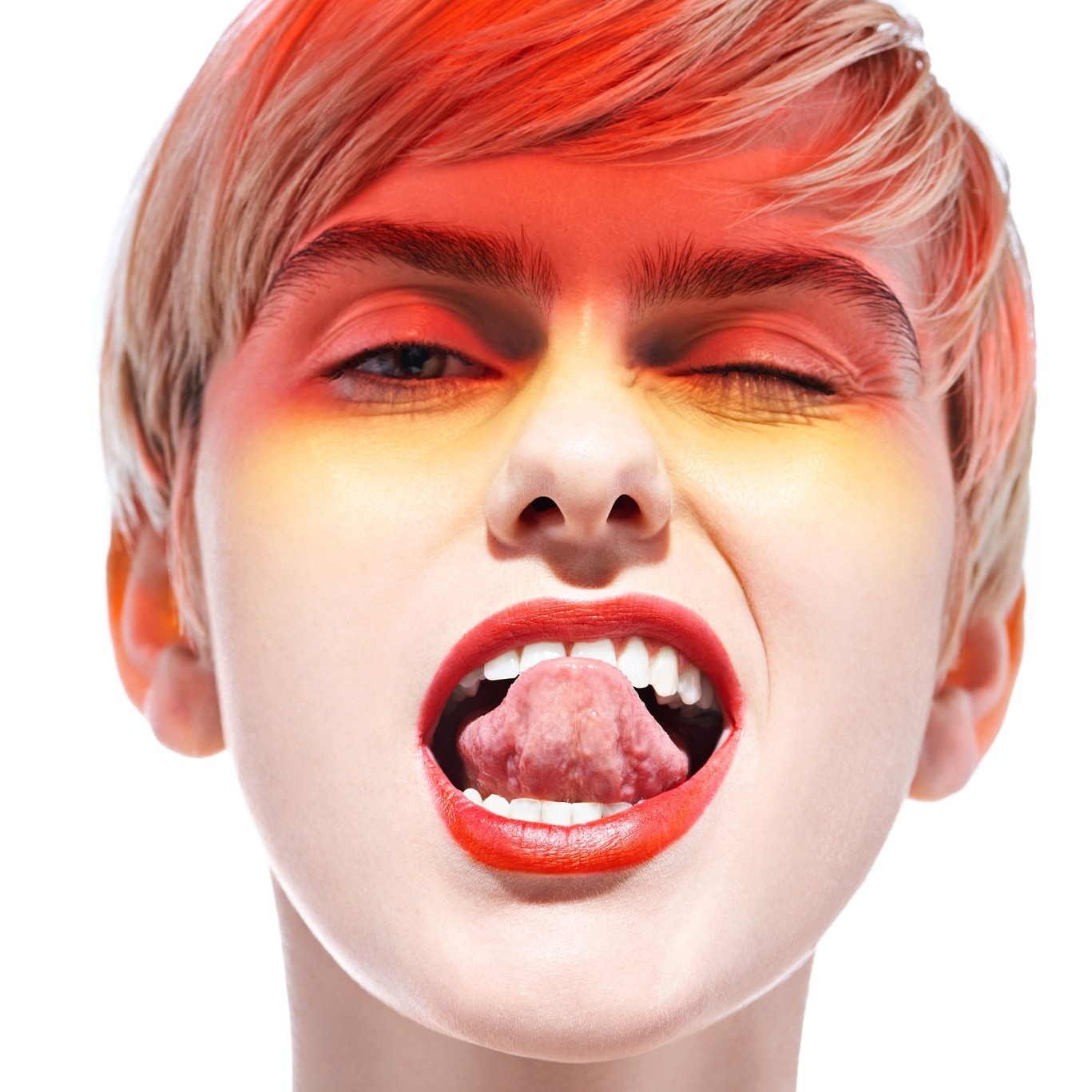 Tomboy is an androgynous singer-songwriter changing the game in music. Originally from Massachusetts, they’re now based in LA creating Pop, RnB and Dance influenced sounds. Tomboy has been in Nylon, V Magazine, Vogue Thailand, Vogue Italia, Elle, Vulkan and many more publications. Recently they landed the cover of Vestal Magazine. Eccentric, unique and bold are just three words that describe the kind of artistry Tomboy creates. Listeners can always trust that this is one Tomboy with a twist.

We sat down with Madison Thibodeau to talk about his music, influences and more.

Tell us about one of your tracks, You. How did it come together?

‘You’ is a pop/rnb track about obsessive love. I became so obsessed with this person after only a few times of hooking up, that I made a complete fool of myself trying to make it work. It didn’t sadly and I felt terrible, so what better way to kind of amend the situation than to write a hit pop song about it?

There’s no better way in my opinion! I wanted to take light, happy, energetic sounds like you hear in the production and pair it with a message about a hopeless romantic fantasy. If your fantasies could talk, it would be this song. The melodies remind me of dancing on a cloud, a sort of euphoric feeling it gives you. And the catchy hook will stay in your head, just like the lingering of a really great hookup.

Why did you choose this artist name? Is there a meaning, a secret or twisted side?

Tomboy came about from a previous Instagram bio I had. When I was modeling in New York, my bio was “tomboy with a twist”. And when I started writing music and creating my persona in LA, I thought ‘what a cool name!’ Tomboy, works with the hair and my look and all my friends can call me Tommy. So the bio was actually a pre-face to the artistry I would embark on!

What is your main inspiration?

My main inspiration in what I do is fulfilment. That might not make sense yet, but hear me out. Why do anything if it’s not going to fulfil you in the end? When I was living in New York, I felt hopeless. I was searching for my purpose, but couldn’t seem to find it. When I would sing, it would be there.

Something I didn’t have to look for even, it just felt natural. And every time even now, when I sing or write or perform, I feel the fulfilment of my purpose in action. Music has kept me alive, it’s kept me healthy, and it’s allowed me to become who I’m meant to be. And the best part is I get to help others as I grow as an artist. It’s the greatest gift.

What made you want to become a musician?

When I was younger, I saw Lady Gaga as she was just starting to become famous after she released her single, ‘Pokerface” at Six Flags where I’m from. I remember her wearing this bubble dress and standing on a chair playing a piano made out of bubbles. It was in that moment I realized I wanted to sing and perform for the rest of my life. And ever since then, I’ve been on a pursuit to perform and be that artist that was inspired when they saw Lady Gaga years ago.

What is your routine for creating a song? What is the weirdest moment/place/way a song started to form? And the most boring one?

My routine for songwriting is random honestly. Sometimes it’s an idea that starts from my voice notes, sometimes I get the beat and I write a hit in 10 minutes and sometimes it takes myself and usually the producer to create a bop! The weirdest place I’ve ever written a song was on a job as a hostess at the front desk while I was working. I got the lyrics stuck in my head for my single ‘Pucker Up’ and had to record it in my notes.

I took a small piece of paper from the stand at the front and wrote the lyrics right after. I actually brought that little paper to the session to sing off of when recording. Most boring is probably whenever I’m just home by the keyboard, pretty typical song-writer stuff.

What’s your process for dealing with performance anxiety?

I get nervous EVERYTIME I perform. Even if it’s a virtual performance, like going live on Tik Tok or Instagram, there’s still nerves. The best thing that helps me is actually advice from an interview I watched with Tony Bennett and Lady Gaga. He told Gaga that because she gets nervous every time before she performs, it means she cares. And that is what makes the nerves worth it.

Do you follow a process or ritual before a performance to get rid of nerves or performance anxiety?

Before a performance I always have to meditate, it helps with calming me down and my anxiety. I do my hair and makeup 3 hours before I have to leave. Then of course, you have to get your pre-show content. Always have tea with honey and warm water with me. I never eat two hours minimum before a show. I love performing and moving on stage, but that does not make my stomach happy if there’s food in it! Always take a moment to breath before and affirmations have been really helping me lately. Legit in the mirror telling myself I’m a bad ass bitch and I’ve got this.

What type of musician would you prefer to collaborate with?

I would love to perform with Lady Gaga. I think our music styles would mesh really well together and our voices would sound sick on a track. I did a remix to ‘Stupid Love’ for fun once and I was pleasantly surprised with how good it sounded. I can’t wait to work with her one day, for me that’s when I’ll know I made it.

My favorite part about music is of course singing, it’s just so fun knowing how to sing and practicing riffs and different techniques to use. But mainly, the best part is performing. The energy of a live crowd and how they react to your music is everything. It motivates me to keep going and to create music that not only inspires, but puts people in the mood to want to dance, be free and have fun!

What is it about music that makes you feel passionate?

For me, when I put music out and see how other people react to it, how it effects them in different ways, makes me feel so passionate about what I do. I’ve learned as an artist, you never know where your music will go and who will be impacted by it. I met someone who learned every lyric of my song ‘High Tea’ and used it in their drag show. It was not only such an honor, but so cool to see that my music made someone feel confident enough to want to perform it on their own.

If you had to write a theme song for a movie, which movie would that be? And would it be a current song? Or would you write a new one?

I would write the theme to Batman. Batman and that whole franchise is my second favorite franchise of all time. Batman The Dark Knight to be exact is my second favorite movie. Second to Moulin Rouge, of course. I think it would be really cool to get some hyper pop sounds and maybe even some RnB influenced sounds in certain parts of the film. An epic rock/hyperpop theme song would make the movies modern while still keeping that rugged tough appeal. I would 100% make my own and not use an already released track. I’m too much of a control freak and would want all the credit haha.

Describe your favorite venue for performing.

My favorite venue thus far has been Viper Room in West Hollywood. The energy of that place is unmatched. With the history of all the legends who have performed there before, you can feel that in the room. I’ve actually gotten to perform there 3 times and each time gets better and better. Also just to add, the photos I’ve gotten back each time are phenomenal…something about that lighting.

What musician/ artist/ instrument would you like to add to your band?

I want to add a vocal looper to my set. My goal is to get one this year and start learning. I was raised in acapella choir, so it’s always been in my blood to make beats from vocals. I think it’s going to be so fun to do an acoustic track all from my voice and sing a song on top of it. It’s going be an intimate experience to hear good vocals and also for the audience to step inside my artistry a little deeper.

What accomplishments do you see yourself achieving in the next five to 10 years?

In the next 5-10 years, I’m going to be nominated and win a Grammy. I’m going to do a world tour and I’m going to be in the Billboard Top 10. I also plan to be on the cover of Vogue talking about eating disorders and mental health, which is something I’m extremely passionate about. Being in recovery, I will use my platform to spread awareness and help others. For example, starting treatment centers and even safe spaces at festivals for people who are struggling around the food to come and feel safe, while still enjoying their time.

Connect with Tomboy via

Share
Tweet
Share
Pin
WhatsApp
Reddit
0 Shares
Tags:Artist interviewPop
Roel Wensink20 June 2022
the authorRoel Wensink
Owner
Roel started ForTheLoveOfBands to provide bands and artists with a platform to get their music heard and provide tips gathered along the way. Being a musician himself, he knows how hard it is and how much time it takes to promote your newly recorded gems.
All posts byRoel Wensink
show 4 comments