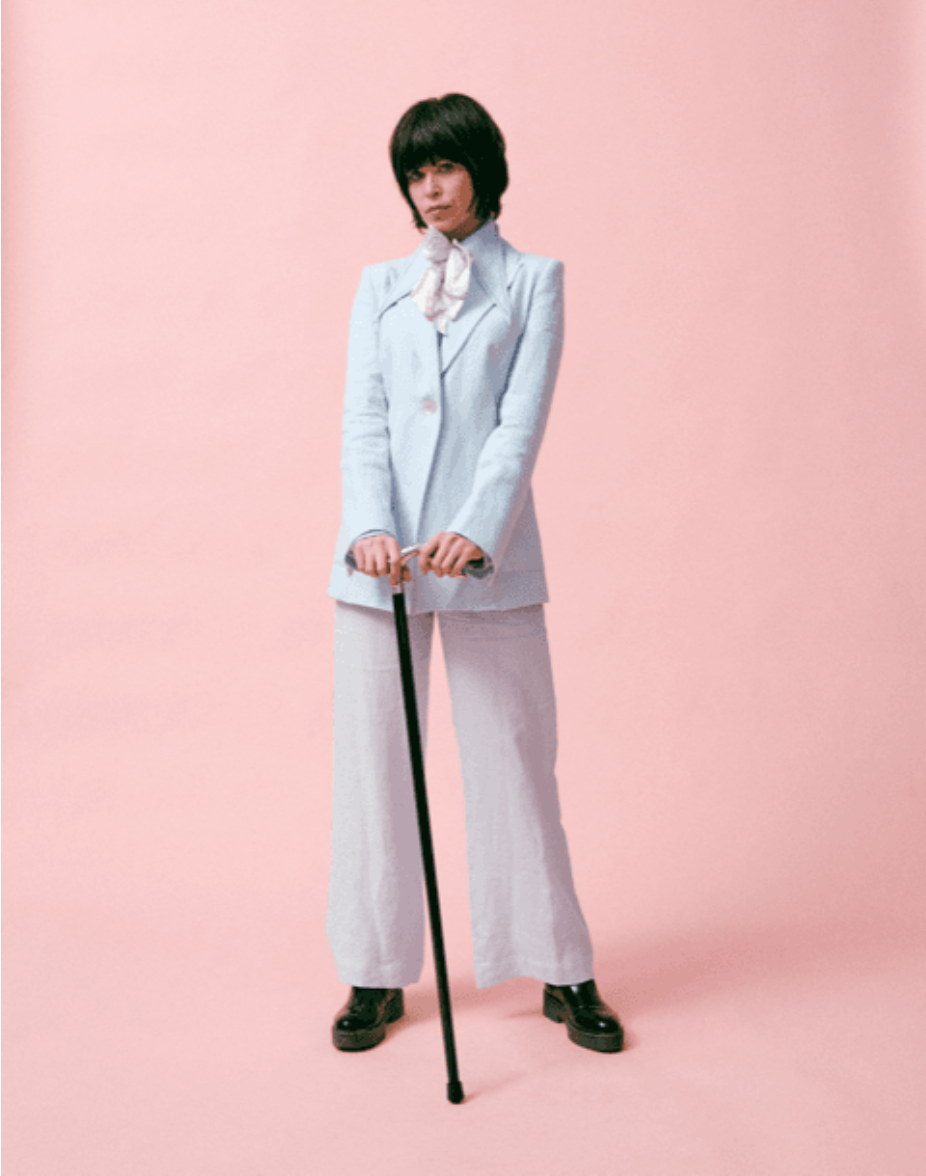 Hayley Mary’s new single “The Chain” was released on November 5, 2020 through label I OH YOU. The song evolved in March, out of the despair and frustration of a Covid-19 world shutting down around her. It’s a feeling familiar to many this year, locked in our homes feeling disconnected from each other and our regular lives.

Hayley explains: “The night I wrote ‘The Chain’ the pandemic was erupting around us all. Venues were closing and I received the news that my flights and headline shows were cancelled. I sat in my apartment in Melbourne staring at my suitcase. Not quite ready to start unpacking and let go of the momentum of my little rock n roll dream, I picked up the guitar and wrote what felt like, at the time, the saddest song I’d ever written.“

You’d be forgiven for thinking such heavy lyrics could easily have become a despairing dirge of a song. Not so. Hayley has managed to create a musically chirpy feel, conveying optimism. The chains she sings of are both shackles and symbols of human connection in the midst of chaos.

Describing the duality, Hayley remembers: “It was a feeling I’d had before akin to depression that there is some kind of invisible magic chain holding me to the earth and keeping me from moving forward or climbing higher, which if I pull too hard on or try to escape from, seems to have devastating consequences behind or beneath me. But this time it was an odd sort of happy-sad because for the first time I felt like the chain not only held me down, it connected me to everything and everyone else. For a brief moment, everyone could see it and feel it at exactly the same time.”

Laughing at the mayhem

“The Chain” opens with a subdued feel, but by the chorus is bouncing along whimsically. Reminiscent of Alanis Morrisette, it is also some what tongue in cheek. Hayley sings about the insanity of our situation, and the frustration of missed opportunities is set against a sprightly melody, melding brilliantly. The song maintains a quirkiness, a sense of laughing at the mayhem together, while not losing the feelings of frustration. It’s a very clever way to construct a tune, and united perfectly by Hayley’s distinctive vocals. I was hooked at first listen, and then I watched the video…

Accompanying the song is an entrancing video directed by Tyson Perkins at Sydney’s iconic Elizabeth Bay House. Tyson has cleverly captured the various elements of the lyric and melody, crafting it into theatre. The video takes viewers on a playful journey, without losing the underlying pathos. It’s an inspired partner to the song with Hayley as lynchpin, her classic looks and natural expressiveness tying it all together.

Hayley Mary is well known to us as the front woman of Australian indie rock sensations, The Jezabels. Together since 2007, the band have scored top 3 hits with all of their releases. They also took out the ARIA Music Award for Best Independent Release for their album Prisoner in 2011. The Jezabels have toured extensively throughout Australia since their inception, playing big festivals and small indie venues, all to enthusiastic crowds. International tours of the US, Canada and UK, followed, supporting the likes of Imagine Dragons, Garbage and Depeche Mode. They’ve played sets at festivals such as Lollapalooza, Glastonbury and Montreux Jazz, consolidating their place on the world stage.

A busy, successful and very popular band as you can see. It’s no wonder then that Hayley experienced the all too familiar burnout of constant touring. An enforced hiatus in 2016 offered her the opportunity to branch out, supporting Birds of Tokyo on their album Brace. Hayley also collaborated with Michael Dow on a track “Flawless” for sci-fi thriller, Butterflies during this time.

Superstars belong in the future…

As the blurb on her website states though…the past is not why we are here. ‘Superstars belong in the future’ is the bold claim, and Hayley Mary has set about proving just that. First, her stunning debut as a solo artist in the form of “The Piss, The Perfume” was released in October 2019. This was closely followed by “Ordinary Me” and “Like A Woman Should”. These were all co-written with her partner Johnny Took, songwriter, guitarist, and one third of DMA’s.

Hayley’s solo EP soon followed, including the above releases. “The Piss, The Perfume” was released on I OH YOU label in January 2020, doing well in the weird pandemic world of 2020. It attracted widespread praise from several quarters including NME, Flood Magazine, Clash Mag, The 405, Paste Magazine and DIY Mag. A flood of support from Spotify and Apple Music solidified the EP’s success.. The songs showcase Hayley Mary’s knack for capturing a sense of time and place. Written in Scotland as an ode to her life in Sydney, they encapsulate the essence of that town in its murky hours.

Hayley was able to showcase some of her new songs in May 2020, on ‘Delivered Live’ a music and comedy streaming initiative. Set up in Melbourne, Australia the show provided an alternative for audiences and musicians alike during COVID restrictions. You can see Hayley’s set and interview with host Henry Wagons, here.

A star on the rise, keep your eyes and ears peeled as Hayley Mary makes her unique mark in the music world.

Hayley returns to the stage with a handful of shows during November 2020 if you’re lucky enough to live in Sydney, Australia. For the rest of Australia and the world …well, we just have to be patient and wait for her to be able to grace a stage near us (hopefully soon!). At least we can binge play her music on streaming sites and YouTube in the meantime, or better still…buy a copy of ‘The Chain’ and/or EP ‘The Piss, The Perfume’ here or here. You know the mantra…SUPPORT the artist, BUY the music.

For information about Hayley Mary’s up coming gigs and to purchase tickets, go to: hayleymary.com

You can listen to ‘The Chain’ and other Hayley Mary delights at: soundcloud.com, apple.com, spotify.com, deezer.com

the authorLynette Bamford
Australian based writer and blogger. Can usually be found out and about at local gigs or scribbling at my desk. I love finding and promoting emerging bands.
All posts byLynette Bamford
Leave a reply