Heat vs Light – Explode Like A Sun [album review] 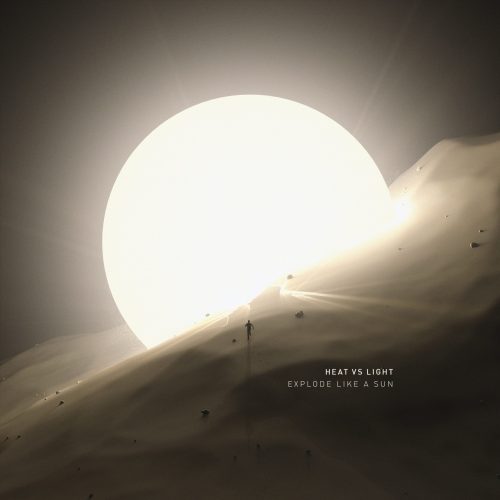 “We were very keen to make an ‘album’ rather than a collection of songs… I know it’s not a very modern way of doing things, with playlists and everything these days, but we just come from a background of listening to great albums.”

A hard-edged, unforgiving guitar-led track paying homage to a hard-drinking local legend, may sound like something of a strange choice for a single with which to lead your all-important second album out into the wide, wide world, but Heat vs Light are 4 young lads and a gal that hail from the Lancashire town of Burnley, and they’re proud and seemingly driven to do things just a little differently up there.

Comprising of J.P. Keenan on vocals, guitar and keys, Lee Rogerson on bass, Sean Roche on guitar, Steven Lockley on drums and Mo Lockley on trumpet, Heat vs Light have taken their time to painstakingly craft the album they wanted personally, an album on which the songs are allowed to flow into one another with sculptured segues and samples. “Not a concept album,” according to the band’s front man, ‘but definitely a considered collection meant to be heard in it’s entirety.’ So why lead with, Jimmy Satan Dances!!?

“It’s probably the most raucous track on the album,” J.P. admits. “We wrote this song about a hometown legend in Burnley called Jimmy Satan, who was a happy drunk full of tall tales. He sadly passed away a few years ago, so it’s a half-tribute, half-cautionary tale!

“Jimmy would always have this biker jacket on covered in patches and badges and in the summer months he wouldn’t be allowed in any of the local pubs because the jacket used to stink! This was really the inspiration behind our twist on a lyric video.” An inspiration that sees a kaleidoscope of badges and skeletal patches spring and dance and swirl into an animated life of their own, each mouthing along to a loud and raucous cautionary video that you just know Jimmy Satan would have been extremely proud about. It is a swirling video to a whirlpool of a song that, to the band, encapsulates their, “ideal doorway into the sonic and emotional palette”, of Explode Like A Sun, officially released on 1st June. The video ends on a haunting spectral-like image lounging somewhat unnaturally in the corner of a hazy smokey bar. A reoccurring theme, and a warning to us all?

What of the rest of the album? Are the other 8 tracks just as raucous or foreboding?

Compared both musically and vocally to the likes of the Doves, The National, and British Sea Power, Heat vs Light have, over a period of two years, self-produced a collection of songs with contagious hooks that, when heard together take you on some journey towards the centre of the band’s essence, tightly crafted but not obtrusive, setting about to snare you, to rock you and to enthral you.

As well as the bottom-of-a-glass warning of Jimmy Satan Dances!!, there is the immediate and unapologetic welcome from Detritivore, with its foot-tapping drum rhythm and melodic highs and lows from a lilting, tilting encapsulating vocal performance. The song’s layered effect is enhanced by an abstract, almost vibrating guitar riff, full of gnarling alien-like feedback implanted within the main lead melody. Alternatively confusing and enticing.

Hemlock is spellbinding: simultaneously psychedelic and exotic and overflowing with asian influences, whilst J.P.’s voice again conjures up its myriad of shapes and colours, this time to a constant unnerving beat from Steven Lockley’s drum. Soothing and flowing and hypnotic, something to sweep you along… before then tugging you away on its rip tide.

Always Judge A Book By Its Spine refuses to allow you to comfortably settle, with its almost paranoid and distrustful drum beats that verge on the edge of frantic, the voice and guitars trying desperately to rein the rhythm in before throwing caution to the wind and, now suddenly unfettered, joining in. But the softness is rediscovered and successfully regained, just in time for the beguiling tales of both Icarus and, Icarus Descends.

J.P.’s voice is more angst driven in its pleading throughout the track, Just The Sound. Less cautionary perhaps, but more incessantly beseeching.Left alone to fight back against both drum and guitar, and to forlornly plead for whatever will bring some unseen object of his affections back to him, it is more hauntingly Gary Lightbody than Jez Williams in tone and feel. And this feeling of helplessness is further enhanced on the gorgeously moody Freeze Frame: the now soulful vocal always haunting, remorseful and full of abject regret, bringing the album to a thought-provoking conclusion as the needle sticks repetitively in a far-away groove and an unknown girl’s disembodied voice is slowly carried ever further out of reach.

The second album is always said to be the most fraught, the most problematic, but throughout Explode Like A Sun, Heat vs Light have become attuned as to how to tease and tempt the listener closer to their world. At times they will attempt to warn you, and at times they will serenade you. You will be enticed and captivated by both, in equal measure.

the authorSimon Gale
Simon was born in London but now lives in beautiful Cornwall. Whilst waiting for his first novel to be discovered by the rest of the world, he spends his time reading anything and everything, and listening to and writing about the music he is passionate about.
All posts bySimon Gale
show 2 comments