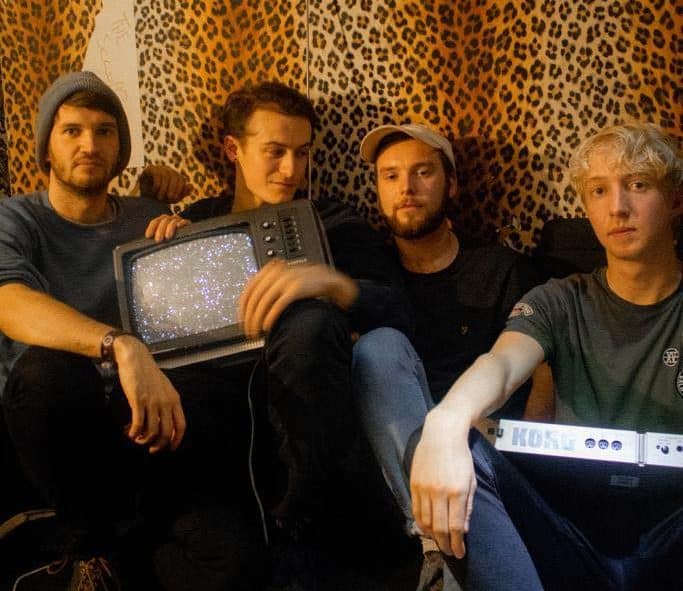 With their brand of infectious psychedelic pop, Foreign TV have been plying their trade since 2018. Hailing from South West London, the foursome brings an energy and wit to their music along with contagious musicianship. On the 20th of May 2022, the band are offering up their debut EP titled ‘Can We Stop Here?’ unto the world. The 4 track project channels the feelings of losing time, wasting moments, and reflection. Lush chord changes, decorated with lightly distorted and vibrato brushed guitar lines, resting on top of a mattress of moody low end are some of the features that add to the 4 brand new tracks on ‘Can We Stop Here?’

‘Arcade Games’, the lead single, was released on the 22nd of April on all services, it has an accompanying music video, directed by Hansel Rodrigues (CANNES Film Festival, 2019). We talked to Max Caulfield about their new release ‘Can We Stop Here?’, as well as rituals, inspiration and much more. Enjoy!

Where do you come from and what brought you together?

We all hail from Epsom, a town at the top of Surrey known for its horse racing as well as being close enough to London to kind of claim you are from London. We know each other through school and really bonded over spending hours and hours creating music together. We drool together over new releases of indie-psych, jazz-inspired hip hop, or even hidden 70s soul gems. Jay (bassist and vocalist) is getting us all into DJing with him, and oh wow do some of the northern soul tracks get you bopping.

Tell us about Arcade Games. How did it come together and why did you write this song?

Arcade Games is our lead single; it’s like listening to a velvet dressing gown being washed at 30 degrees. A bit of rumble at the bottom, but the chugging of the synth-driven lead lines as well as the calmly sang lyrics by Rob (guitarist, vocalist) get you thinking of the good old times before you’ve left them. Like all the tracks on the EP, it’s taken a few forms over the years, and it’s one that we’ve all contributed towards, which is how we write most of our music, like an enthusiastic four-headed dog.

What instrument would you like to add to Foreign TV?

As we are starting to feel confident with adding more synth lines and pads to tracks, we’d love to add either a synth player to join us live or even a guitarist so Max can keep on the keys. Although Tim (drummer, backing vocals) would definitely vote for having a percussionist to keep him company at gigs. Would also love to get a brass player to join us for a bit! We already have one track with a live trumpet solo (Old Dreams) but we need to play live with a trumpeter!

Do you follow a process or ritual before a performance to get rid of nerves or performance anxiety?

We usually meet in the group 10 minutes before we go on, and go over our vocal harmonies. We’re getting quite obsessive over them, I think the band ‘Parcels’ have really got us thinking about how we can use inner voice movement to create magic harmonies together.

What is the most interesting thing we don’t know about Foreign TV yet?

Probably that we are getting prepped for our first UK tour in July 2022! Got a few things to sort out first, but can’t wait!

Describe your favorite venue for performing.

We played a great gig in Liverpool in someones bedroom once in the early days. No stage, audience were squished right up to our faces and mics. Was practically singing into someones eyeball at one point. Love it.

While rehearsing your music; who is the band stopper (or break starter?)

Jay will come to band practise with a 6 point plan of things to do, and then get distracted by literally anything. I think we’re pretty good and getting stuff done though!

Are there any musicians who inspire you? What qualities do you admire about them?

Stevie Wonder definitely pushed the envelope on how crazy chords could create popular easy listening tunes. We love sneaking in funky chords to add a little bit more flavouring to the dish.

What is it you would like people to do while listening to your song?

Catch themselves singing along to it without even realising. At gigs though, just seeing the good people of London having a boogie to our tracks is perfect for us.

What colour(s) would your music be like for people who suffer from synaesthesia?

Yellow. We are so yellow. With a little bit of brown.

I love just creating. Starting with nothing, or a fragment of an idea. Thinking of something to add, improving it, having a brainwave, realising it was a bad idea, changing it, tweaking it, and eventually releasing something to the world! The crazy thing is, is that things can then be shared and experienced by other people from all over the place. Like it’s not even tangible, but it’s so heavy.

If you had to write a theme song for a movie, which movie would that be? And would it be a current song? Or would you write a new one?

I think it would’ve been cool to write the theme song for Stuart Little. That movie had everything. Maybe we’ll end up writing a musical for it one day?

What if you would have to fuse your music into a different genre; what would be the most hilarious one?

Seeing our music mashed with country could actually work you know. Might need to arrange a cross over there for 2023…

What is one message that you would like to give to your fans?

Our fans are so amazing! There is no greater feeling than having a group of people come together to sing back some lyrics at you that you wrote in your bedroom. Can’t wait to share this new music with them!

Connect with Foreign TV via

Share
Tweet
Share
Pin1
WhatsApp
Reddit
1 Shares
Tags:Artist interviewIndieindie psych
Roel Wensink25 April 2022
the authorRoel Wensink
Owner
Roel started ForTheLoveOfBands to provide bands and artists with a platform to get their music heard and provide tips gathered along the way. Being a musician himself, he knows how hard it is and how much time it takes to promote your newly recorded gems.
All posts byRoel Wensink
Leave a reply